Showing posts from November, 2018
Show all

From Sea To Sky Kiteboarding 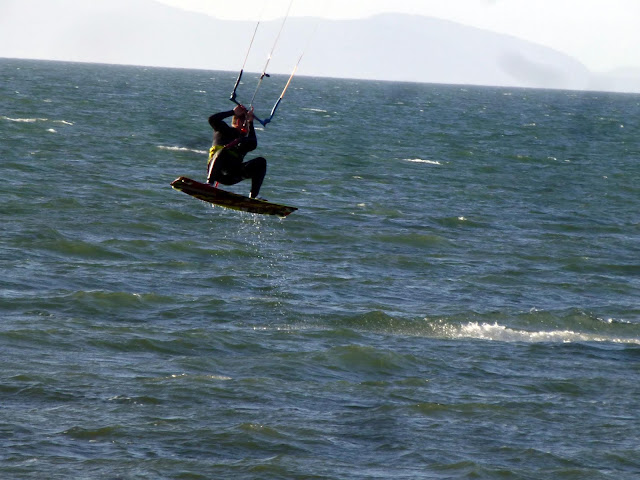 HUMANS alas are wingless but love to soar in whatever ways they can. At Crescent Beach, it's not unusual to see kiteboarders take to the skies in strong winds. Recently, a group of adventurers with boards strapped to their feet were a spectacular sight. 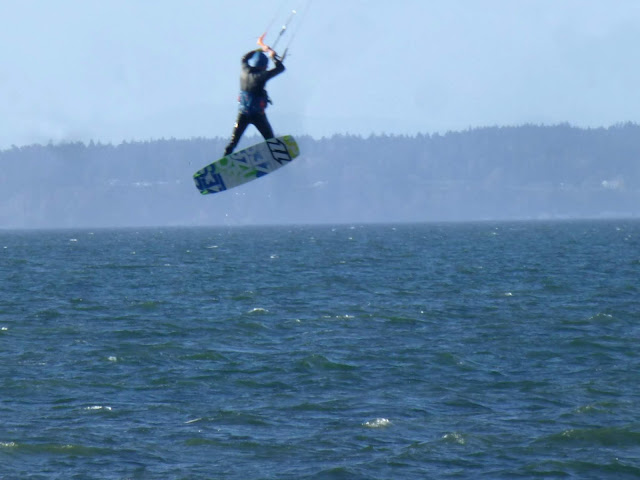 Bound to fabric wings, they bounced boldly and carefree across choppy waters. We onlookers were delighted when gusty winds yanked them up into acrobatic maneuvers. 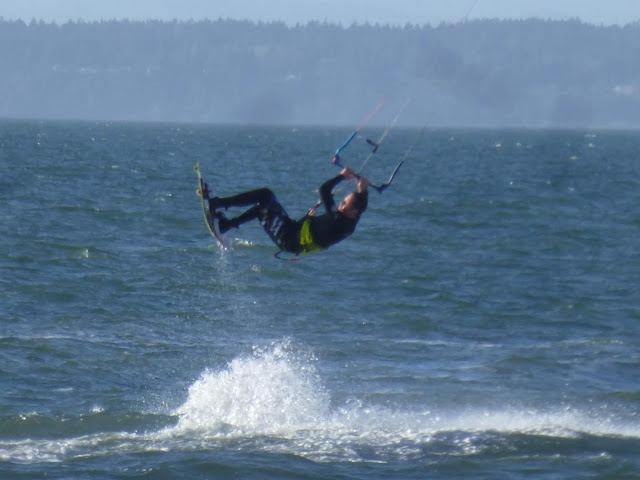 One adventurer (below) had trouble getting started. Not everyone harnesses the power of wind easily on the first, second or third try. His attempts were awkward but I had no doubt he would take flight eventually. Inspired by his resolve, I wondered if I gave up on some goals prematurely. They say talents are gifts but perhaps persistence and interests are gifts. If you're interested, you keep trying and get better. 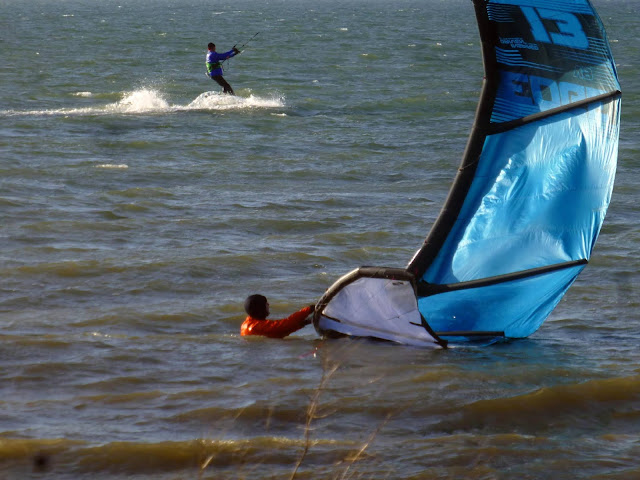 White Rock And A Rainbow Of Comforts 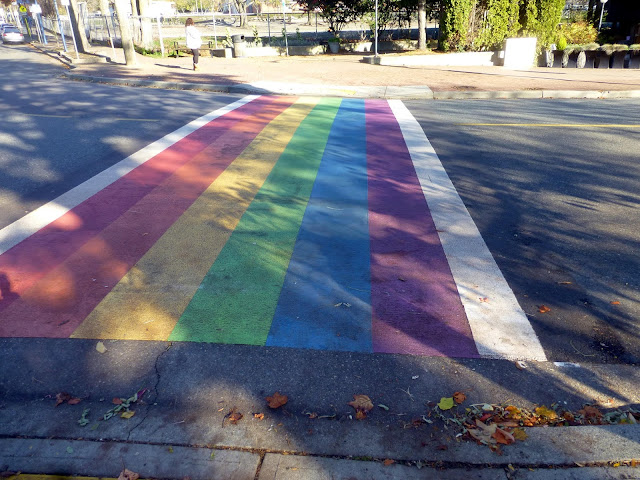 THE CROSSWALK looked airy, as if it was about to fly off into the morning light, during my recent visit to White Rock. Some balked at the special attention given to a group that adopted the rainbow symbolically as their own. The bright bands of colour had been vandalized but renewed, painting the small City undeterred and inclusive. 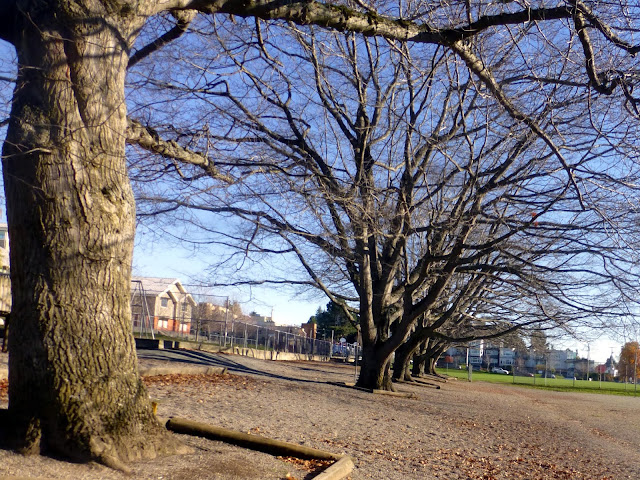 A row of stoic old trees stood nearby, rooted at the foot of the White Rock Elementary playground. Over the years, the trees have seen thousands of children grow away from the seasonal shady comforts of their branches and leaves.

Around the corner I was surprised the United Church, scheduled to be torn down, was still standing. The door was closed after being opened for decades, not only providing religious services but Christmas dinners and cold-weather shelter. I believe it will be replaced by a smaller church and apartments for seniors that might look like THIS. 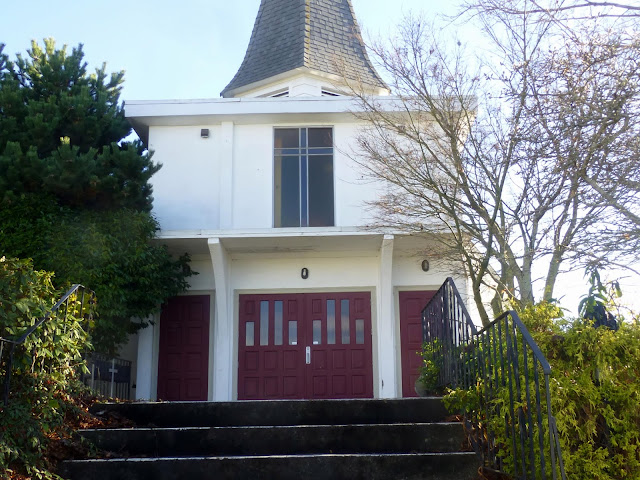 Do you have a keepsake that travels with you? Mine is a tiny heart (below) that my ill dad sent me from a hospital to bring me comfort when I was a child. I memorialized it with a picture, entwining my trinket to the church's door handle, imagining the endless hands that touched the latch in hardship and in happiness. The portal will change into something unfamiliar, perhaps, but the goodwill, like my father's gift, will last. 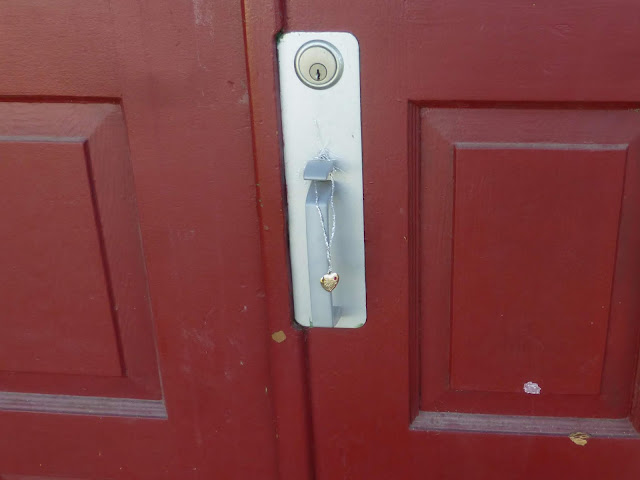 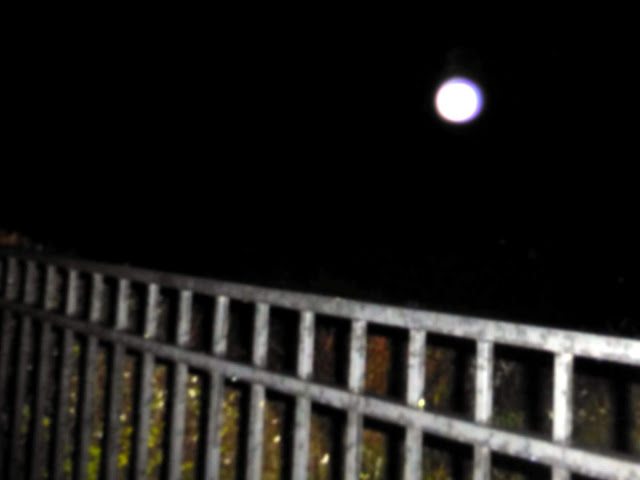 I GRABBED my warm coat and boots and headed out the door to Kwomais Park in the early morning dark. The air was fresh after a heavy rainfall. A sprinkling of porch lights guided me along the way. Do you love to wrap yourself in the blanket of night the way I do sometimes? At the park's guard rail overlooking Boundary Bay, the moon or glow from some bulb hung like a balloon without strings in a sky too black even for stars. 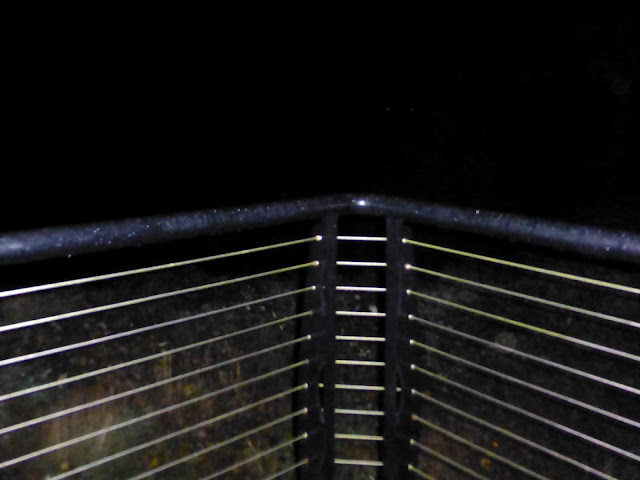 I heard the crunching of other feet. A lone jogger hidden by a hoodie rushed past me. 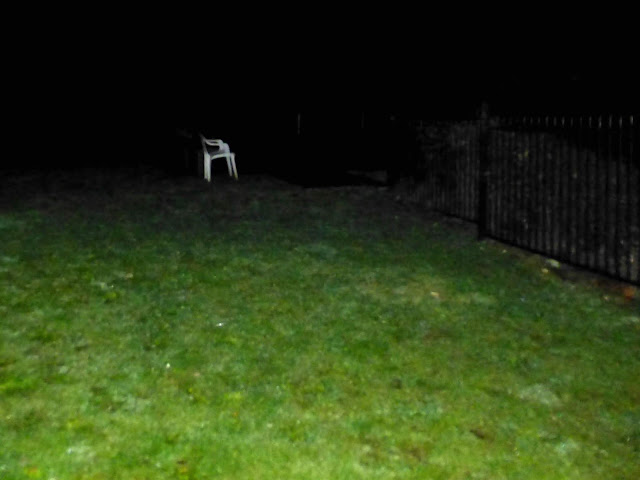 Exposed by the flash of my camera, an unexpected white plastic chair (above) ... 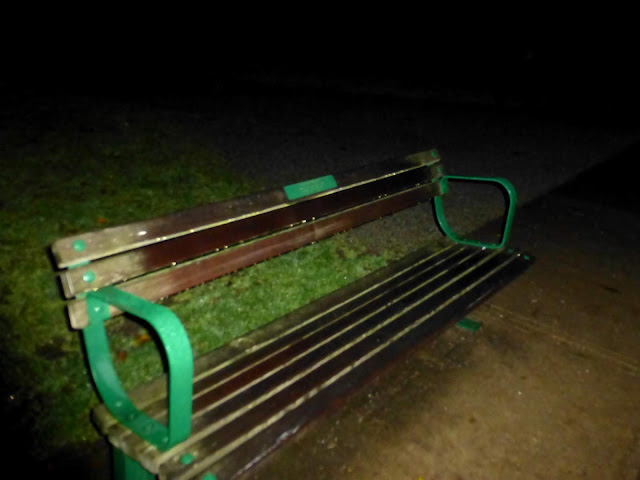 and a familiar damp bench lurked behind the veil of night. 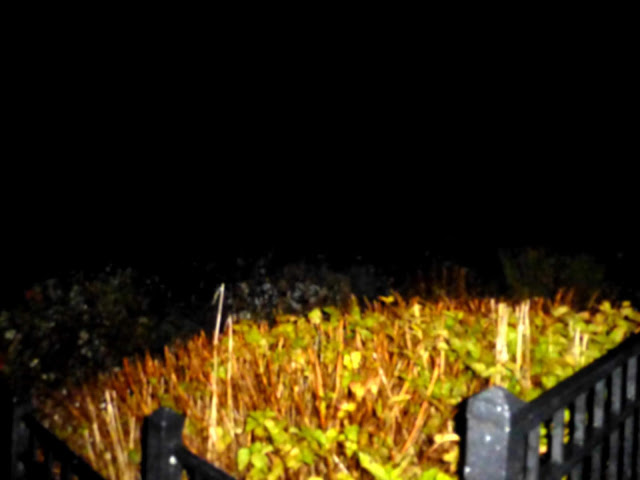 In the deep void, empty of all traffic noise, the enchantment of faintly rustling leaves melded with the distant calls of gulls and eagles stirring, preparing for a new day. 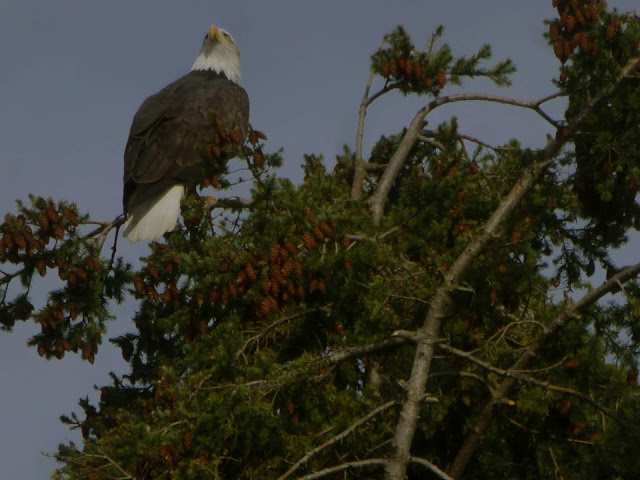 Later, in the fullness of light ... an entirely different mood and view. 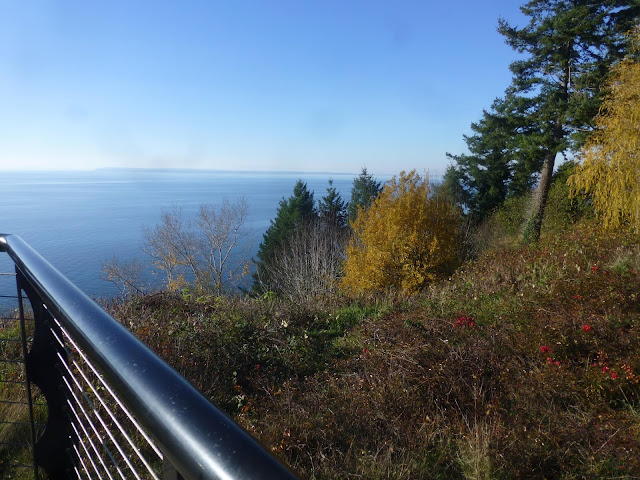 Worn But Not Broken 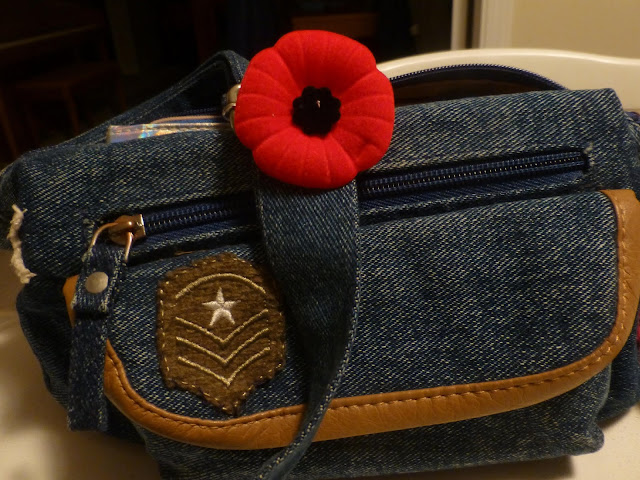 POPPIES are everywhere this Remembrance Day. It's time to reflect and be humbled by the service of others on behalf of us all. Have you wrongly taken democracy for granted the way I have in my little corner of the world? Worn out Lady Liberty (below) reminded me it took voting and activism from my good neighbours to the South recently to keep authoritarianism at bay. I'm grateful for the checks and balances. 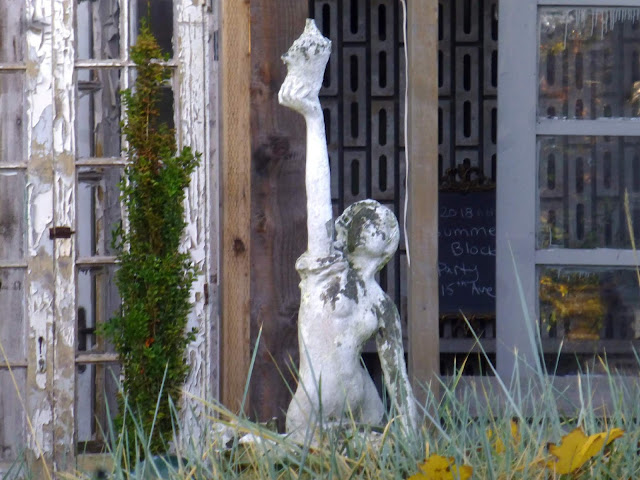