Showing posts from October, 2019
Show all

A New Day & Second Chance For A Beleaguered Leader 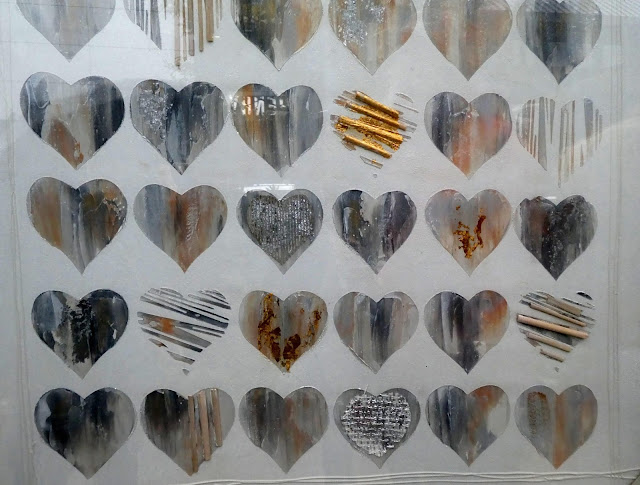 I saw this "heart art" through the window of one of the stores we passed by at the lineup for a Trudeau event in Cloverdale the day before voting. It rained and umbrellas were out much like at a previous election event that I wrote about HERE.

As it turned out, it was a new day but with the same Liberal government in Canada after the October 21st election. Justin Trudeau won but lost seats after a contentious campaign where opponents pummeled him with his misdeeds from the distant past and mistakes of the last four years. Enough people opened their hearts, however, to give him a second chance as Prime Minister. 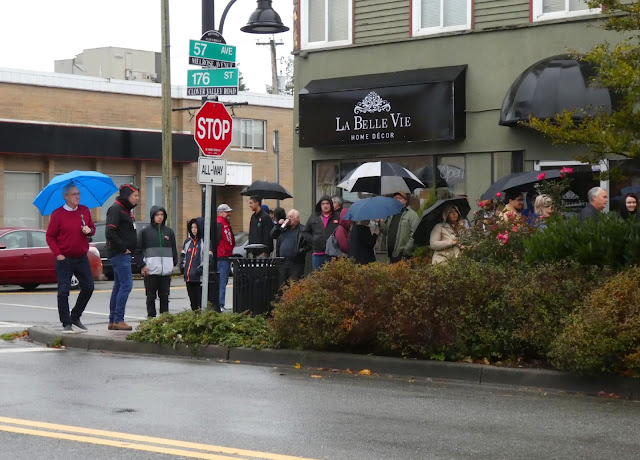 Liberal candidate, MP Gordon Hogg, destined to lose to a Conservative in his local riding, is the fellow (above) under the blue umbrella who lagged behind and didn't get a second chance. At the time of the event, he was cautiously hopeful in a tight race. 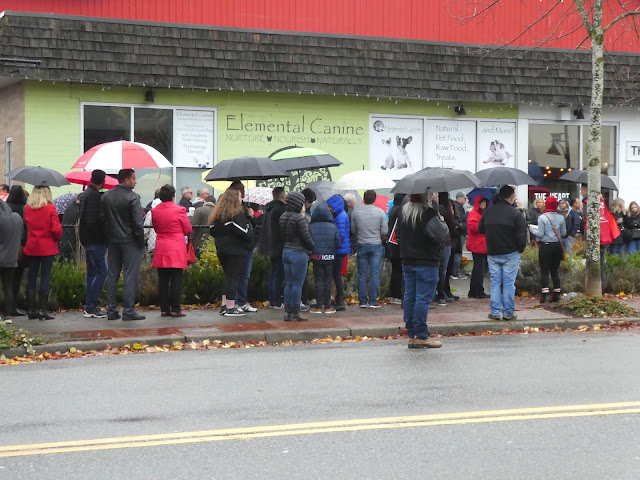 After waiting two hours in the rain in part due to someone in the crowd suddenly needing emergency medical care and an ambulance, Trudeau finally arrived. Running late, he was whisked in and out in minutes to his next destination. 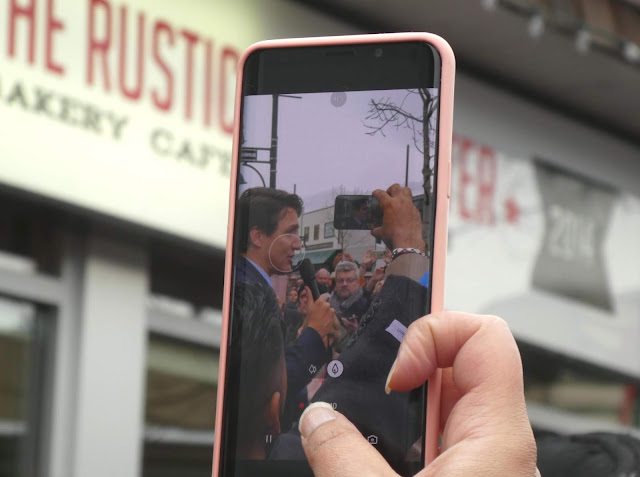 From the back of the crowd I had limited chances of getting a decent shot, let alone a selfie. Someone in front of me took the picture below on my behalf with my camera. 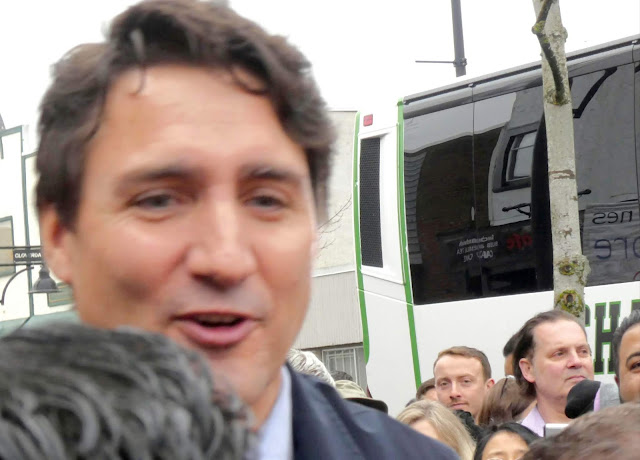 Trudeau was garnering lots of affection from the folks in the crowd who were very excited to see him. Someone shouted, "We love you, Justin!" Haha, no, it wasn't me. 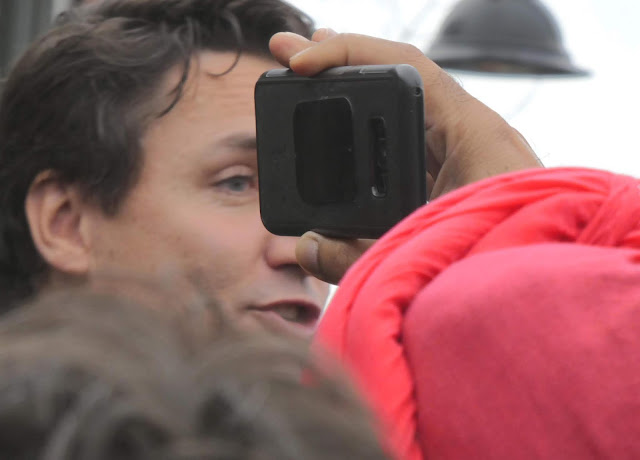 Red is the Liberal colour in Canada. I am glad a centrist Liberal "red" still runs through the country, although not represented in the oil richest provinces. Trudeau's mettle will be tested with an opposition Conservative Party dedicated to seeing him fail. He will need to find a sweet spot among those wanting to ban all oil production and those who want some small amounts of oil production while transitioning to new energy, to those wanting to grow the oil industry and haven't accepted the urgency of climate change.

I wish him luck. The bloom is off the rose for Trudeau but the flowering is still there. 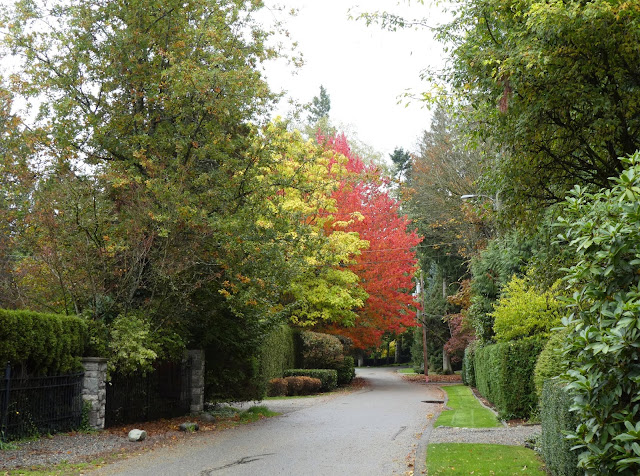 A Moment Of Respect & To Reflect On The Minute 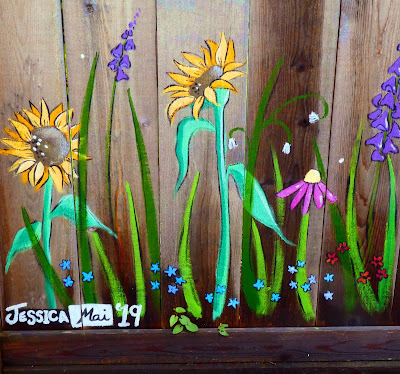 I have only just a minute,
Only sixty seconds in it.
Forced upon me, can’t refuse it.
Didn’t seek it, didn’t choose it.
But it’s up to me
to use it.

I must suffer if I lose it.
Give account if I abuse it.
Just a tiny little minute,
but eternity is in it.

The recent unfortunate passing of the much-admired American politician, Elijah Cummings, reminded me of a poem (above) by Dr. Benjamin E. Mays that Cummings so passionately once read on the Congress floor. 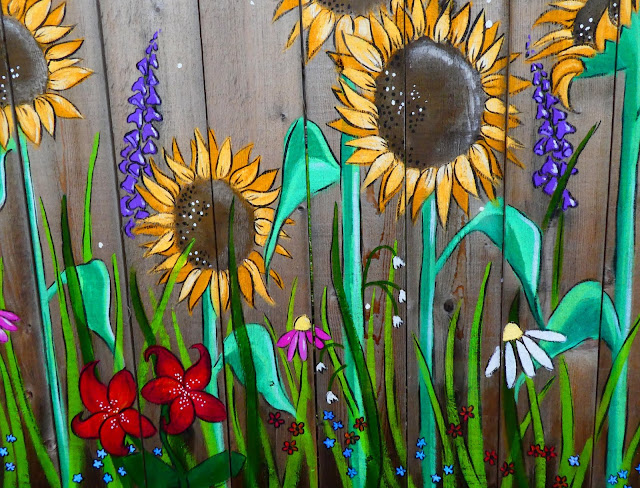 Time is granted in empty minutes to do with as we please as the years slip through our fingers all too quickly like sand. I have a great respect for these "little" minutes, although I'm not sure that I fill them adequately.

If you fill each one well and pile enough of them together, sandcastles can be built, insurmountable odds beaten and all manner of barriers and borders brightened. 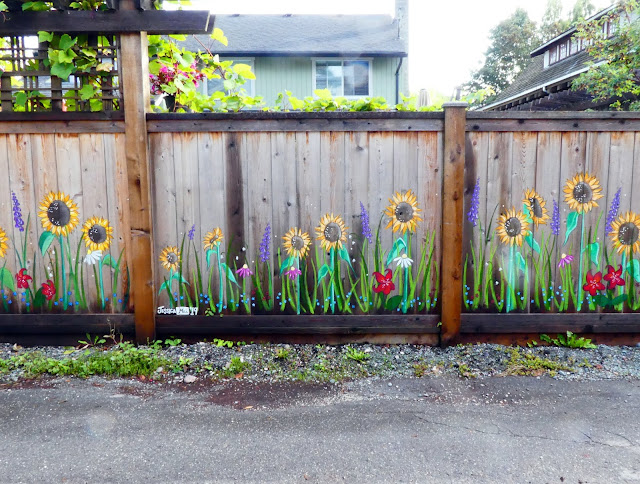 I remember the Crescent Beach fence painted mostly only with sunflowers until an artist named Jessica recently used her minutes to add more beautiful blooms.

I doubt Congressman Cummings was big on fencing but he probably would have loved the diversity of the flowers so this post is my bouquet to honour his memory and life.